Trending Self-Help News
Home / Personal Growth / Bodies kept alive in plastic bags and lifeless ‘blank’ humans ready for a new consciousness to be uploaded: Controversial booth at CES claims to offer IMMORTALITY – but is all as it seems?

Bodies kept alive in plastic bags and lifeless ‘blank’ humans ready for a new consciousness to be uploaded: Controversial booth at CES claims to offer IMMORTALITY – but is all as it seems?

Bodies Kept Alive In Plastic Bags And Lifeless ‘Blank’ Humans Ready For A New Consciousness To Be Uploaded: Controversial Booth At CES Claims To Offer IMMORTALITY – But Is All As It Seems? “At one mysterious booth in the Las Vegas Convention Center this week, the reaction of passers-by has been unlike anywhere else.

Murmurs of ‘I don’t like this,’ and ‘no, this is too much for me,’ could be heard as CES attendees crowded around the Psychasec setup, greeted by what appeared to be lifeless human forms on display in large glass cases.

During a brief tour through the booth, exhibitors dressed in all white sold the idea of immortality, through a plan to upload human consciousness to ‘human sleeves’ of whatever design you desire – before concluding around the display of ‘Joel,’ a fresh ‘sleeve’ in a vacuum sealed bag, breathing and eating through a tube.

While the display has been jarring to some, there is more to it than initially meets the eye.”

“Human sleeves are not real, just an advertisement for a Netflix series that is coming up on the air.  Please see the following video for clarification near the end. A possible vision for the far future.” 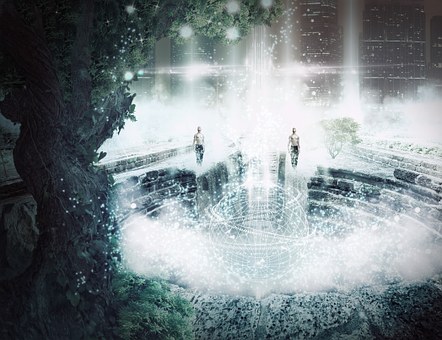 Free Background Stock. Future Possibilities, Present Fantasy.
“Best Tech of CES 2018: Robots taking over the world, augmented reality, artificial intelligence, altered carbon, underwater drones, self-driving cars and so much more! We saw it all at CES 2018 in Vegas. The future is now and what we, humans, have accomplished in such a short time is mind-blowing.”
Kristen Sarah
Published on 18 Jan 2018.

My name is Patrick Ireland, living in the Philippines with my wife and two daughters. I have been studying the web for over a decade. Now that I am 60 years old, I am starting to apply some of the knowledge that I have gained. "Learn from yesterday, live for today, hope for tomorrow. The important thing is to never stop questioning." -Einstein.
Previous Trudeau’s Weak Carbon Plan Benefits Largest Polluters
Next A Tribute To The Amazing Storytelling Skills Of Rod Serling And Woodward TV In The Mystical, Matrix World In Which We Live – What You Need To Know About Space And The Incoming STORM