Free Background Stock. Justin Trudeau. #The Long-Haired, Mac-Daddy. #Gangster. #Isis Apologist. #Islamo-Fascist. According to Roget’s Thesaurus the definition of a ‘Gangster” is an individual who associates himself with a group of people (In this case, Isis, Jihadist militants) for whom their main predilection is to, “Kill, murder, butcher, slaughter and victimize,” innocent men, women, and children. As our own Prime Minister has openly associated and aligned himself with this group of individuals, he deserves to be labeled as a “Gangster.” Quid-Pro-Quo (a favor or advantage granted or expected in return for something).

“Returning Islamic State Jihadists Can Be An ‘Extraordinarily Powerful Voice” in Canada.

“Take the Red Pill Justin, to make such an irresponsible statement in our Canadian Parliament is a great testimonial to your integral lack of judgment and to the total lack of cohesion and responsibility which you are assuming, on your role to protect Canadians as our Prime Minister. Isis Jihadists cannot be rehabilitated. I will allow the following video and articles to speak to my reasons why this is definitely the case.

The main problem with Canada today runs much deeper than with the ‘Canadian Experience.’ Canadians must first begin addressing some of the ‘external’ issues that are affecting not only Canada today, but many ‘democratized,’ developed countries in the northern hemisphere. The main problem with Canada is not uniquely a Canadian problem; it is the result of a historical takeover of our country that was already initiated by other Prime Ministers and Pierre Trudeau in 1974 when he turned the Bank of Canada over from a public bank to Rothschild private banking interests. Pierre was a Bilderberger and Justin is following his father’s modus operandi, holding secret meetings that are ‘leaked’ to the CBC and the mainstream Liberal Press Corp.

The IMF, the Rothschilds, and the globalists are behind the fall of Canada today. Justin Trudeau is simply a tool of the Islamo-Fascist Left-Wing Alliance that represents the frontline soldiers of the New World Order, who are systematically dismantling the economic systems of many developed nations around the world, under the guise of radical Islam. If you want the sheep to understand what is really the cause of Canada’s troubles, we should be addressing the deeper malaise that exists over this entire Earth, that is bringing the fall of the U.S. dollar and the systemic destruction of many developed countries in the northern hemisphere.

We should not only address the issues within Canada, our problems run much deeper than the surface politics of the Liberals, the NDP, and the Progressive Conservative Party. We must take the time to educate Canadians because that is what they need in order to fully understand the entire truth of the matter. We have the potential to become a great voice for Canada as long as we include information about the greater external threats facing Canadians, in addition to the issues that are involved in the secular politics within the country today.

It is time for the Governor General of Canada to step in and dismiss this Prime Minister from public life for his irresponsible actions and irrational statements. The behavior and statements made by this Prime Minister are no longer amusing for Canadians to watch. Justin Trudeau does not care about the safety of all Canadians, at least those Canadians who cannot afford 3 million dollars in C.S.I.S. And R.C.M.P. Protection, at the expense of the taxpayers.”

“Video of Justin Trudeau angrily opposing efforts to jail returning ISIS members and espousing dubious programs to reintegrate them into the Canadian population.”

“Canadian Prime Minister Justin Trudeau argued in an interview to air next week that a reformed Islamic State (ISIS/ISIL/IS) terrorist can evolve into “an extraordinarily powerful voice for preventing radicalization,” an endorsement of programs he has promoted to reintegrate veteran jihadists into Canadian society.

The end-of-year interview with CTV will air in full on December 29, but the outlet published snippets of Trudeau’s responses to a variety of questions on Friday. Asked about the potential to rehabilitate Canadian citizens who traveled to Syria and Iraq to join the Islamic State, the prime minister said, “There’s a range of experiences when people come home.”

“We know that actually, someone who has engaged and turned away from that hateful ideology can be an extraordinarily powerful voice for preventing radicalization in future generations and younger people within the community,” he argued. In parliament, Trudeau pledged to prosecute those who broke Canada’s anti-terrorism laws by joining the ISIS group, but also said his government would try to reintegrate them into society.

“We recognize the return of even one individual (who joined the ISIS group) may have serious national security implications,” Trudeau said.”

OTTAWA – “The question of what to do about members of the so-called Islamic State who try to return to Canada has become a heated political battle in recent weeks.

The Liberals are putting the safety of all Canadians at risk by allowing (Islamic State) fighters to return to Canada and proposing a ‘reintegration program’ and support services for them, Conservative deputy leader Lisa Raitt wrote in a fundraising letter last week.

Prime Minister Justin Trudeau shot back in a fiery exchange with Conservative Leader Andrew Scheer on Tuesday, defending the government’s approach even as he accused the Tories of scaremongering. We have enforcement, surveillance, and national security tools that we use to a significant degree, he said. But we also have methods of de-emphasizing or de-programming people who want to harm our society, and those are some things we have to move forward on.”

By Lee Berthiaume The Canadian Press

Trudeau: ISIS Fighters Returning Home to Canada ‘Can Be an Extraordinarily Powerful Voice for Preventing Radicalization.’

“Canadian Prime Minister Justin Trudeau said in a recent interview that Islamic State fighters who return home to Canada can be rehabilitated and serve as “an extraordinarily powerful voice for preventing radicalization in future generations.”

Trudeau sat down with CTV chief news anchor Lisa LaFlamme for a wide-ranging interview to reflect on 2017, including the collapse of ISIS’ so-called caliphate in Iraq and Syria and the threat posed by the group’s Canadian terrorists returning home.” 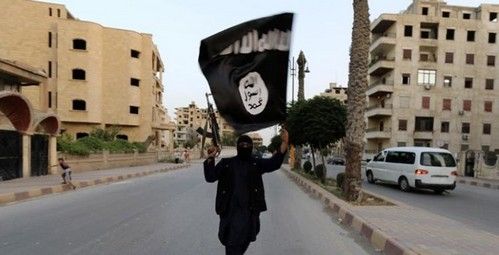 PARIS — “The Russian Defense Ministry and Iraqi Prime Minister Haider al-Abadi made separate announcements last week that the Islamic State had been defeated. Of course, this doesn’t mean that these terrorists won’t be popping up elsewhere like bomb-toting, head-chopping Whac-A-Moles.

Last month, the BBC reported a deal that allowed some ISIS fighters to escape the Syrian city of Raqqa — the Islamic State’s former “caliphate” — under the nose of Western and Kurdish officials, ostensibly to facilitate a declaration of “mission accomplished.”

The question is where these fighters will pop up next. Are we supposed to believe that they’re going to parlay their real-world experience making violent propaganda videos into careers with advertising agencies? Will they be making documentaries to peddle on the film-festival circuit?

Some prominent leaders are holding open the door for Islamic State members to return to the West. This is the subject of debate in Canada and France, with Canadian Prime Minister Justin Trudeau and French President Emmanuel Macron entertaining the idea of allowing the return of citizens who left to join ISIS overseas. (I’m even more worried about countries that aren’t having this debate and whose returning ISIS fighters have quietly slipped back in beneath the radar.)”

Trudeau Must Have A “Pathological Case Of Liberal Guilt.” 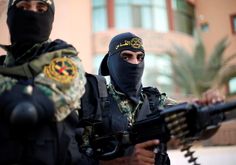 Trudeau Sparks Outrage With Plan To ‘Reintegrate’ ISIS Terrorists Back Into Canada. 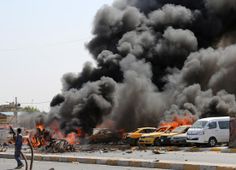 OTTAWA, November 21, 2017 (LifeSiteNews) — ” Conservative leader Andrew Scheer blasted Prime Minister Justin Trudeau for the Liberal plan to “reintegrate” Canadians who return to the country after fighting for the Islamic State of Iraq and Syria.

“Can the Prime Minister explain to the House exactly what a program or reintegration service would look like for the people who commit these kinds of atrocities?”

The government revealed in late 2015 that some 180 individuals “with a nexus to Canada” had joined Islamic terrorist groups overseas, and an additional 60 had come back to Canada, according to a report by CBC’s Evan Dyer.

Public Safety Minister Ralph Goodale confirmed in the House 60 ISIS terrorists were back in Canada and “under very careful investigation.”

All the people that will disappoint you in one comforting picture. Adrian Wyld / THE CANADIAN PRESS.

“The road to Hell is paved with bad intentions.”

“Justin Trudeau is truly impressive– his propensity for scandals, corruption, dirty dealings… and selfies, is overwhelming.”

“Ezra Levant of TheRebel.media reports on Joshua Boyle’s meeting with Justin Trudeau that occurred in the middle of his alleged crime spree.” 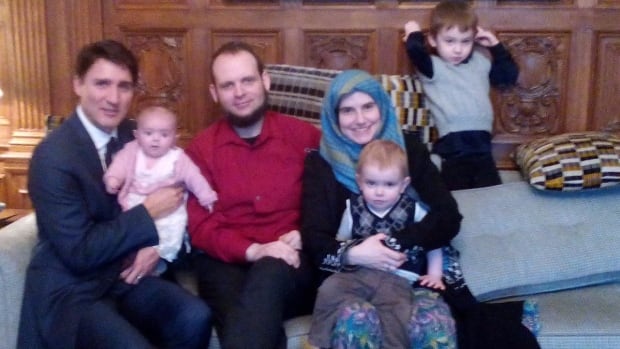 “A meeting between the prime minister and former hostage Joshua Boyle’s family in Justin Trudeau’s Parliament Hill office is raising questions about who gets to meet with Canada’s head of government and why.”

Written By By Peter Zimonjic

BONOKOSKI: The Curious Case Of Joshua Boyle And Justin Trudeau

“The majority of mainstream media seemed intent upon bending over backward to initially avoid mentioning Justin Trudeau in the same story in which Afghanistan detainee Joshua Boyle was arrested and jailed in Ottawa over the New Years on 15 serious criminal charges. What were they possibly thinking? That it was up to them to spare the prime minister another embarrassment?”

BONOKOSKI: The curious case of Joshua Boyle and Justin Trudeau “How to go from sympathy to antipathy in one easy step.” 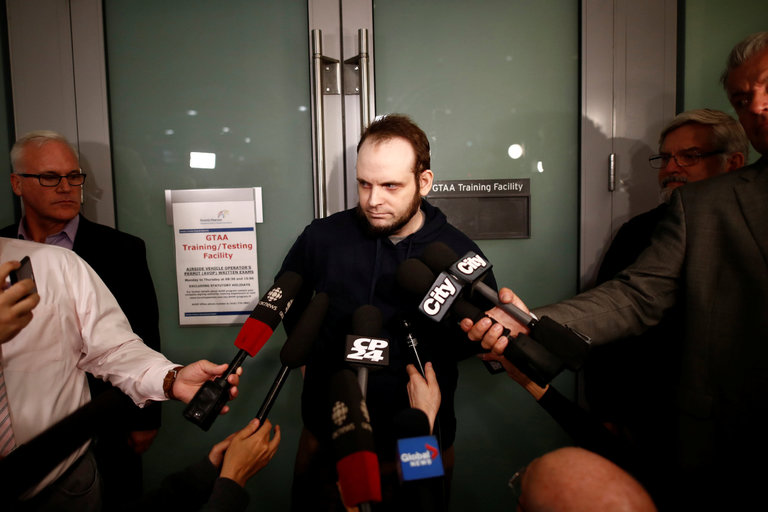 “Canadian Joshua Boyle has been arrested and is facing 15 criminal charges. Boyle and his family were rescued from Taliban captivity in October, five years after he and he wife were abducted on a trip to Afghanistan. Boyle was arrested late last year and remains in custody on charges including sexual assault, unlawful confinement and uttering threats.” 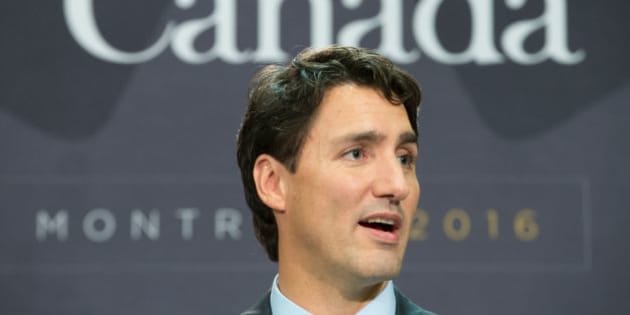 “It has been more than a year since Canadians voted in a federal election to grant Justin Trudeau a majority government, after one of the longest federal election cycles in modern Canadian history.

Trudeau’s overwhelming support came from a message that revolved around “change.” His campaign made a plethora of campaign promises, offering a fresh face, new ideas and the promise of transparency for the Liberal platform.

Trudeau’s actions in government have not lived up to expectations, and Canadians are taking notice. A recent poll has shown the Liberal government’s approval rating dropping a staggering nine points to 42 percent, from a November poll which had Liberal support at 51 percent.”

My name is Patrick Ireland, living in the Philippines with my wife and two daughters. I have been studying the web for over a decade. Now that I am 60 years old, I am starting to apply some of the knowledge that I have gained. "Learn from yesterday, live for today, hope for tomorrow. The important thing is to never stop questioning." -Einstein.
Previous The Truth! The Rothschild’s Bank And The I.M.F. Own Canada. A Canadian Constitutional Lawyer Sues The Bank of Canada – You Won’t Believe What Happens Next!
Next Trudeau’s Globalist Agenda Is Falling Apart.