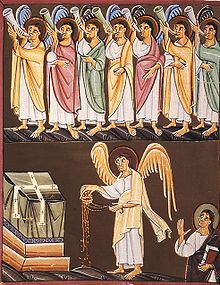 The seven angels with seven trumpets, and the angel with a censer, from the Bamberg Apocalypse.

Seven trumpets are sounded, one at a time, to cue apocalyptic events that were seen in the vision of the Revelation of Christ Jesus,[1] by John of Patmos,[2] as written in the Book of Revelation of the New Testament. The seven trumpets are sounded by seven angels and the events that follow are described in detail from Revelation Chapters 8 to 11. According to Revelation 8:1-2,[3] the angels sound these trumpets after the breaking of the seventh seal. These seals secured the apocalyptic document, that was in the right hand of Him who sits on the main throne.[4]

Before the invention of the brass trumpet, God had Moses make two silver Trumpets (Numbers 10:2), but the traditional sacred horn of the ancient Hebrews was the shofar made from a ram‘s horn. It has been used since Moses‘ day (Exodus 19:13)[5] to get the attention of the Israelites, signal, or to prelude an announcement and/or warning from God. Joshua had 7 priests carry 7 horns for 7 days and circle Jericho 7 times, then the priest sounded the horns, the people shouted and the walls came down. (Joshua 6:4).[5] In St. Paul‘s letter of I Thessalonians 4:16, “the trumpet of God” heralds the Second Coming of Christ. 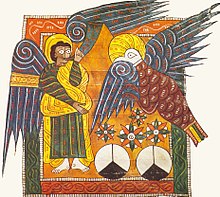 Upon the first trumpet sound, hail and fire, mixed with blood, is thrown to the Earth burning up a third of the trees on the planet, and all green grass. [6]

By the second trumpet sounding, it cues something like a great burning mountain that plunges into the sea and wipes out a third of all sea life and ships. A third of the oceans will become blood.[7]

By the sound of the third trumpet, a great star called Wormwood falls to the Earth poisoning a third of the planet’s freshwater sources, such as rivers and springs. Men will die from drinking its bitter taste.[8]

Following the sounding of the fourth trumpet, a third of the light that shines from the Sun, moon and stars became dark from these celestial bodies being “struck”. This catastrophe caused complete darkness for a third of a day, during the day, even through night hours.[9]

The fifth trumpet sound is the “first Woe” of three. Before this trumpet sounds, an angel (translated eagle in some versions) appears, flying in mid-heaven, and warns, “Woe, woe, woe, to those who dwell on the earth, because of the remaining blasts of the trumpet of the three angels who are about to sound!”[10]

The fifth trumpet prompts a personified star to fall from heaven. The star is given the key to the bottomless pit. After opening it, the smoke that rises out, darkens the air and blocks the sunlight. Then from out of the smoke, the Locusts were unleashed. They were scorpion tailed warhorses, having a man’s face with lion’s teeth. Their hair was long like that of a woman’s and flew with locust-like wings. They were crowned with golden crowns and protected with iron-like breastplates. They were commanded by their king, Abaddon, to torment any man who does not have the seal of God on their forehead, by using their scorpion-like tails. It was also made clear to them that they must not kill anyone during their five-month mission of torment.[11]

Preterist views
Robert Witham, a Catholic commentator, issued his two-volume Annotations on the New Testament, in 1733. Commenting on Chapter 9, he offers two preterist views for identifying the locusts with scorpion tails.[12] 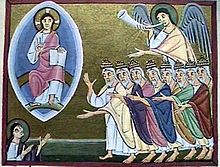 Five months after the fifth trumpet blast, the sixth one sounds.[14] This is the “Second woe”, where four angels are released from their binds to the “great river Euphrates“. They command a brute force of 200 million mounted troops whose horses dissipate plague from out of their mouths, most notably: fire, smoke, and brimstone. The mounted horsemen wore breastplates with the color of fire, hyacinth, and brimstone. The horses had a lion’s head and their tails were like a serpent, even with a snake head. They are responsible for the deaths of a third of mankind who are stricken by the plague that emanated from these armies.[15]

The sound of the seventh trumpet signals the “Third woe”. This is the final trumpet sound and the final woe. Loud voices in heaven proclaim Christ as ruler forever and ever under the “Kingdom of our Lord”. Thanks is given to God, the Almighty and praise for the wrath that came, the dead who were judged, and the bond-servants rewarded. The temple of God in heaven then opened and the Ark of the covenant appeared in His temple. Then lightning and peals of thunder occurred followed by an earthquake and a great hailstorm.[16]

In Christian Eschatology, the first six trumpets are used to serve as a wake up call to the sinners on Earth and a call to repentance. Each trumpet blast brings with it a plague of a more disastrous nature than the one before it. The trumpet is used to build anticipation and tells the reader that an alert, announcement, or warning is about to take place. The seventh trumpet does not bring a plague with it. Rather, it is sounded so that glory is given to God and His kingdom is announced.[17]

The Preterist understanding is that these blasts are like war trumpets against apostate Israel of the time period and that they correspond to events in the Jewish Wars. For example, the second trumpet is the nation of Rome depicted as a mountain, symbolic for great nations in the Old Testament, and its destruction of Galilee and the Sea of Galilee becoming full of blood and dead bodies.[citation needed]

Concerning the second trumpet blast, Futurist Christian apologists speculate that the “great mountain burning with fire” that plunges into the sea, in Revelation 8:8,[18] is an impact event by a possible Near-Earth object.[19][20]

Christians who follow the Posttribulation rapture doctrine, argue that the seventh trumpet is the last trumpet mentioned in I Corinthians 15:52,[21] and that there is a strong correlation between the events mentioned in Isaiah 27:13,[22] Matthew 24:29-31,[23] and I Thessalonians 4:16.[24] These parallels are used to support the doctrine of the rapture occurring after the tribulation. Therefore, Posttribulationists see the rapture happening during the seventh trumpet. The nature of the 7th trumpet shows that “time is no more, and that the mystery of God is finished, Rev. 10:6,7. At the 7th trumpet, Jesus rules and reigns forevermore,[25] He has taken His great power and reigned,[26] and He rewards the righteous, and judges the wicked.[27] Both Jesus and Paul declare that when Jesus comes, His reward is with Him, and He rewards everyone according to their works, Rev. 22:12,2 Tim 4:1.

There are some scholars which describe a part from the finale from the second symphony by Gustav Mahler, as the seven trumpets, actually played by 4 trumpets, bass drum, cymbals and triangle, which are offstage.[citation needed]

My name is Patrick Ireland, living in the Philippines with my wife and two daughters. I have been studying the web for over a decade. Now that I am 60 years old, I am starting to apply some of the knowledge that I have gained. "Learn from yesterday, live for today, hope for tomorrow. The important thing is to never stop questioning." -Einstein.
Previous Presidency Of Barack Obama
Next VFW Post 1093 And VetToCEO Announce Veterans Entrepreneurship Training Pilot Program