The Power of Perspective: A Simple Way to Ease Anxiety 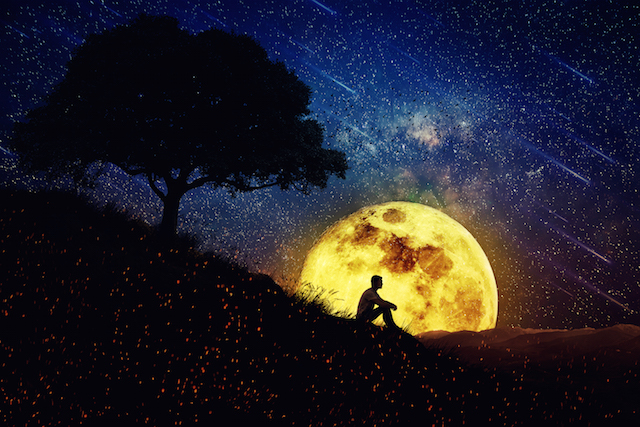 “The primary cause of unhappiness is never the situation but your thoughts about it. Be aware of the thoughts you are thinking.” ~Eckhart Tolle

One of the first ideas I learned in law school was “the reasonable third person,” a legal fiction created to help figure out if someone has acted unreasonably. There’s no clear-cut definition, so I spent a lot of energy arguing what a reasonable person would do. This hypothetical person haunted my law school exams, and later, my career.

But I realized the reasonable third person could teach me something beyond the courtroom. I could apply that perspective to ease anxiety in my own life.

I’d have too much coffee and be nervous. I’d try to be casual, but I’d either fidget too much or sit too still, trying not to attract attention. I was always so nervous I’d get asked a question and not know what to say.

Mostly, I just sat silently in meetings. Occasionally I’d make a comment, but I’m sure no one noticed because I was so unhelpful. I always felt like an idiot.

Then I realized how personal and subjective my interpretation was. By changing my perspective, I could compose a new, more useful narrative of events. My interpretation—my thinking—could relieve my distress.

I felt like I was always running late, but I made it to meetings, didn’t I? So “I could barely make meetings in time” became “he arrived in time for the meeting to start.”

“I’d always have too much coffee and be nervous” became “Joseph drank coffee.” “I’m sure no one noticed because I was so unhelpful” became “he was pretty quiet during the meeting.”

This narrative removed the self-centered thinking. It focused on what actually happened, not what I felt about what happened.

Afterward, I was less overwhelmed by my thoughts and feelings. I had a broader perspective, like that of a third party. My feelings weren’t bound so tightly to events.

I began to call this third person thinking. It’s the idea of observing your experience from a distance instead of identifying with how you felt about it. I could rise above my own viewpoint of an event.

It’s like the judge deciding whether someone acted like a reasonable person under the circumstances. It’s irrelevant what they subjectively experienced. Focusing on the cold hard facts might overlook the emotional impact of events, but it also allows you to change that emotional impact.

Okay, so this sounds nice in the abstract, but does it actually work? Researchers have examined this skill (called “self-distancing” in the study) in situations that provoke anxiety or anger in real life, like public speaking. The results are encouraging: The studies presented clear improvements from third person thinking.

Third person thinking also improves performance during the event itself. Study participants with social anxiety gave better public speaking performances when they engaged in self-distancing. Athletes also perform better when they engage when they manage their self-talk in the same way.

The theory looks good. But are we just fooling ourselves? After all, the objective situation hasn’t changed.

Maybe it seems that way, like trying to convince yourself you’re happy when you feel like crying. But what you think affects how you act and feel. It’s a cycle. Each stage—thoughts, feelings, actions—affects the others.

So, how do you actually do it?

First, consciously observe how you’re talking to yourself. What are you telling yourself—are you saying, “I really screwed that up,” or “I’m sure I sounded like an idiot just then”? Just slowing down like this breaks the automatic chain of reaction, preventing a cascade of emotional reflexes.

Second, write it down. This forces you to slow down even further. It makes the distancing more real, and it’s important to create that muscle memory of practice, just like meditation.

Third, replace personal pronouns like “I” and “me” with third person pronouns in the story you’re telling yourself. Use your name. “I had to give a speech” becomes “Joseph gave a speech” and “she spoke for ten minutes.”

Finally, focus on the events themselves, not the narrative you tell yourself about them. You might be biased to focus on your inner monologue. But try to keep your assessment objective: not “I did a terrible job and I’m about to get fired” but “Her boss told her to redo one section of the assignment.”

First, make sure you’re being friendly to yourself. Third person thinking isn’t going to do much good if you’re still judging yourself but camouflaging that judgment by changing a few words. Instead, talk to yourself as if you’re talking to a friend who went through the same situation.

At the same time, stay objective. A true friend is supportive but honest; you know your friend will tell you the truth. Being kind, but objective, is the most supportive thing you can do.

Second, third person thinking isn’t about avoidance. Don’t use it to withdraw from how you feel or what you think. You’re still engaging with the event, only from a healthier place.

Finally, just do it. For me, third party thinking felt (very) silly at first. It was also difficult because I was so used to being wrapped up in the events around me.

But just try it out. There’s really nothing to lose, and it just might help you feel calmer and less overpowered by what occurs in your life. It certainly did for me.

Joseph Castelli practiced mergers and acquisitions in New York City and studied at NYU School of Law. Before that, he taught English in South Korea for three years, hiked and meditated in the Himalayas, and competed in powerlifting competitions. He now writes at Esquire No More.

The post The Power of Perspective: A Simple Way to Ease Anxiety appeared first on Tiny Buddha.

My name is Patrick Ireland, living in the Philippines with my wife and two daughters. I have been studying the web for over a decade. Now that I am 60 years old, I am starting to apply some of the knowledge that I have gained. "Learn from yesterday, live for today, hope for tomorrow. The important thing is to never stop questioning." -Einstein.
Previous BREAKING: Planet Earth Hacked, Biggest Attack In History
Next SOMETHING IS VERY WRONG – THIS HAS NOT HAPPENED UNTIL NOW