The Sri Yantra. The Prosperity Formula

From Wikipedia, the free encyclopedia
Please follow the link in order to read the original article. Under Fair Use.
Added citation in Wikipedia.
http://www.wolframalpha.com/input/?i=The+Sri+Yantra&t=crmtb01
Source: Wolframalpha.com 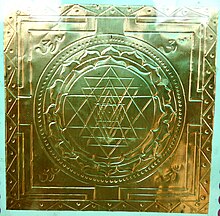 The Sri Yantra is a form of mystical diagram, known as a yantra, found in the Shri Vidya school of Hindu tantra.

The Sri Yantra in diagrammatic form, showing how its nine interlocking triangles form a total of 43 smaller triangles. 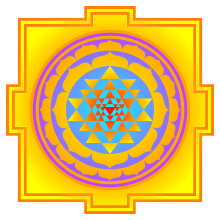 The diagram is formed by nine interlocking triangles that surround and radiate out from the central (bindu) point.

When the two-dimensional Sri Chakra is projected into three dimensions, it is called a maha meru. Mount Meru derives its name from this Meru-like shape.

The worship of the Sri Chakra is central to the Shri Vidya system of Hindu worship. Four isosceles triangles with the apices upwards, represent Shiva or the Masculine. Five isosceles triangles with the apices downward, symbolizing female embodiment Shakti. Thus the Sri Yantra also represents the union of Masculine and Feminine Divine. Because it is composed of nine triangles, it is known as the Navayoni Chakra.[1]

These nine triangles are of various sizes and intersect with one another. In the middle is the power point (bindu), visualizing the highest, the invisible, elusive centre from which the entire figure and the cosmos expand. The triangles are enclosed by two rows of (8 and 16) petals, representing the lotus of creation and reproductive vital force. The broken lines of the outer frame denote the figure to be a sanctuary with four openings to the regions of the universe.[2]

In a recent[when?] issue of Brahmavidya, the journal of the Adyar Library, Subhash Kak argues that the description of Sri Yantra is identical to the yantra described in the Śvetāśvatara Upanisad.[3]

Together the nine triangles are interlaced in such a way as to form 43 smaller triangles in a web symbolic of the entire cosmos or a womb symbolic of creation. Together they express Advaita or non-duality. This is surrounded by a lotus of eight petals, a lotus of sixteen petals, and an earth square resembling a temple with four doors.[1] The various deities residing in the nine layers of the Sri Yantra are described in the Devi Khadgamala Mantra.

The Sri Chakra is also known as the nav chakra because it can also be seen as having nine levels. “Nine” comes from “Nau or Nava” of Sanskrit. Each level corresponds to a mudra, a yogini, and a specific form of the deity Tripura Sundari along with her mantra. These levels starting from the outside or bottom layer are:[1]

The Sri Chakra (called the Shri Yantra) is the symbol of Hindu tantra, which is based on the Hindu philosophy of Kashmir Shaivism. The Sri Yantra is the object of devotion in Sri Vidya.

My name is Patrick Ireland, living in the Philippines with my wife and two daughters. I have been studying the web for over a decade. Now that I am 60 years old, I am starting to apply some of the knowledge that I have gained. "Learn from yesterday, live for today, hope for tomorrow. The important thing is to never stop questioning." -Einstein.
Previous How to Ask for What You Want and Need (No, It’s Not Selfish)
Next What are the Luciferian Black Sun Occultists planning for the American Solar Eclipse on 8-21-17?