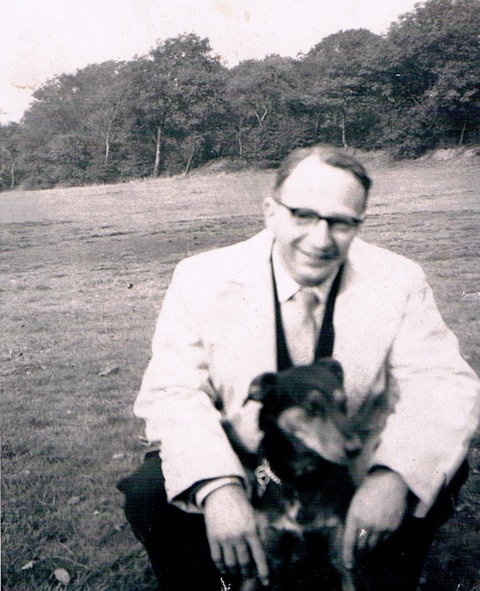 Hi all, it’s Crabby McSlacker, and yes, I’m still alive. Doing great actually!  Just a bit too dithery and preoccupied to do much on the blog lately. So I’m thrilled to bring you another great guest post from Dee over at Break out the Skinny Girl.  Remember not that long ago, she’d just started her blog, and was taking baby steps back into fitness? Well, I guess I’m not the only one who thinks she’s hilarious and inspiring, because she’s already made it as a finalist in the UK Blog Awards. Yay! Anyway, please welcome Dee back, and don’t forget to stop over at her place too on your blog ramblings if you get the chance. –Crabby

In October 2016 I will be trekking 90km across the Escambray mountain range in Cuba to honour the memory of my Dad. Given that just six short months ago I would have struggled to trek from my armchair to my refrigerator, this is going to be a personal challenge for me on a whole other level.

You may remember we first got acquainted way back in September last year, when I’d been blogging for just a matter of weeks. Crabby very kindly let me loose with a guest post, and offered me a moment in the Cranky Fitness spotlight, which was awesome.

I’d been dieting for a couple of months by that point, and whilst my diet was going really well, my thoughts on exercise were kind of still kind of…well, thoughts really. I’d taken a few baby steps but it seemed such a mammoth task you know? I still weighed over 300lbs, and everything hurt when I hauled it around.

But I’d gone and done it…on this very site I opened my big mouth and told the world that I was going to get fit. Fortunately for me, the one thing bigger than my arse is my pride, which point blank refused to let me off the hook.

I started by walking. Some days I didn’t walk very far – I was still largely governed at that point by the asshole voice in my head, who was smarting from his failure to tempt me into eating hob-nobs till the wheels fell off my diet.  That same asshole voice took every opportunity tell me that marching 300lbs of body up hill and down dale was bad for my health, and sometimes in the early days, I listened. 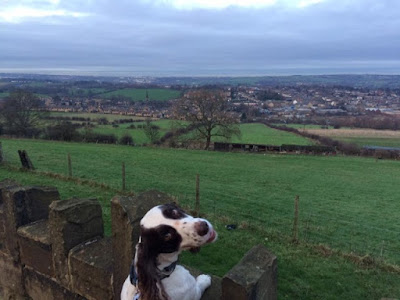 I live in Yorkshire, England and when I leave my house there’s a hill in every direction so I’m not going to lie, it was tough. Often when I walked I imagined that a tub of Haagen Dazs and a big bag of cheese balls were waiting for me at the top of whichever hill I was climbing. They’d collectively been known to prompt the only bursts of speed out of this fat old body in recent years, so whatever works, right?

Slowly, the hills got easier and I found myself walking three or four miles daily with the dog, who by this time was looking very buff, I have to say. And under my winter coat, my silhouette was slowly changing too.

I was hugely inspired at the beginning of November to read Jan Bono’s post on here about the Great Columbia Crossing…that lit a fire under me more than anything else I’ve ever read, and so began the real process of getting fit. I wanted to have a longer-term fitness goal as well as my dieting goal, and I craved that feeling of euphoric achievement that Jan described when she’d accomplished something really special.

When the company I worked for announced their overseas fundraising challenges for 2016 back in December, I knew that I’d found my thing, and I signed on the dotted line. Then I had a gin, and a lie down at the enormity of what I’d taken on.

Somewhere around Christmas, I invested in an elliptical cross-trainer, and that’s been a bit of a game-changer. When it arrived I was more than a little alarmed to note their disclaimer that ‘too much exercise could injure your body or can cause dead’. 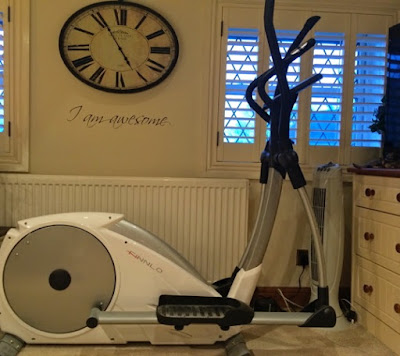 I did a few tentative steps on it when it came out of the box, although not in a serious workout kind of way. I was wearing my slippers at the time, and having moved it around the bedroom with the help of my boy into several different spots until I was happy with the feng shui (otherwise known as making sure it didn’t obscure the view of the TV from my bed) I felt like I’d spent two hours in the gym already, damn thing weighs a ton.

But I went to sleep with much anticipation of waking up the next morning, leaping out of bed and pulling on my gear so I could crack on with an invigorating hour of exercise to set me up for the day. I’d bought new trainers and everything, which even matched the colour of the frame. Woman and machine in perfect symmetry, right? How on earth could it result in anything other than poetry in motion?

So. My new trainers fitted. Sadly the same can’t be said for my exercise gear, which to be fair hadn’t seen the light of day since God was a lad. I mean I know lycra is stretchy but it’s apparently not that stretchy. Naked it was then. Well, naked with new trainers. After two false starts, when I couldn’t seem to get it on the easiest setting (only to discover that it was already on the easiest setting) the penny started to drop that this might not be quite the walk in the park that I’d imagined. I altered the timer to ten minutes (from the hour that I’d brazenly keyed in to start with) and off I went.

One minute in I was doing okay, just feeling it a bit in the legs. Two minutes in I’d noticed that if I looked up I could see my reflection in the TV, which was directly in front of me. Remember what I’m wearing…no, it wasn’t pretty.

Three minutes in and I was starting to hurt. The asshole voice in my mind had sprung into action and he was busy telling me that I’d done enough…don’t overdo it on your first attempt, you must have burned off two thousand calories by now, get off immediately, you can’t carry on!

Four minutes in and I was seriously starting to think that this might actually result in dead. I made it to five minutes. And then I made it to the bed, and laid there for a bit wondering what just happened. Eventually I made it downstairs to the kitchen, on legs made of rubber, and I couldn’t help looking across at the fruit bowl, and wondering just how many grapes I could eat with the seven chuffing calories I just burned. SEVEN!!! I could have earned more picking my nose.

As the weeks went on, I got better at ignoring the asshole voice and I’m now motoring to the tune of 45 minutes at a time. I haven’t graduated from the easiest setting yet but I will, because what I’ve begun to realise is that even this fat old body will respond given enough encouragement. There’s even a note on my wall to remind me that I am in fact awesome…just in case the asshole voice tries to tell me otherwise.

In the last 6 months I have lost well over 50lbs: 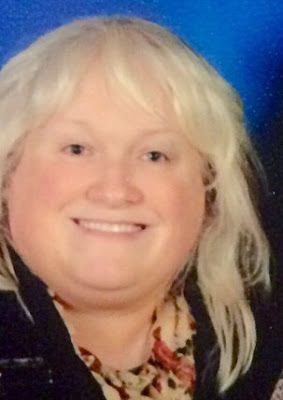 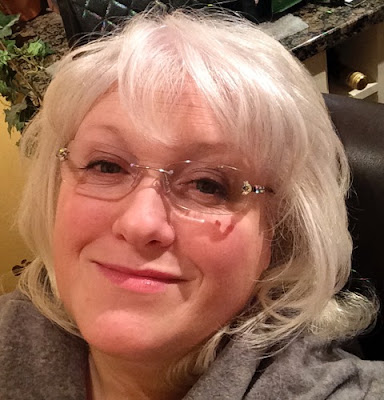 And before I set foot in Cuba I intend to lose another 70. The diet is still going well, and I’m building up my fitness and stamina for the trip without seeking comfort from so much as a single hob-nob. I’ve got a long way to go, but I’ve done the hardest bit…I left the starting blocks.

I will be making this epic journey to honour the memory of my dad, Jim and to raise money for the mental health charity MIND. That’s his photo at the top of the page…handsome old bugger wasn’t he! He was a top bloke with a cracking sense of humour and a proper zest for life.

When I was about six years old, my dad had a nervous breakdown. I don’t think his childhood was the best, and ghosts from his past caught up with him in middle age as these things often do.

Sadly the 1970s was the age of experimental brain surgery. His doctors suggested that the best way to fix his broken spirit was to remove the part of his brain that dealt with anxiety and depression. It didn’t end well, and my dad lived out the rest of his years battling severe mental illness.
I’m beyond sad that my dad’s life was effectively cut down, but I am so immensely proud that despite making the ultimate sacrifice, it’s because of his bravery and that of other people like him that the advances in medical science (in particular understanding the brain and treating mental illness as a whole) are where they are today. My dad was a part of that. In my eyes that makes him a hero.

This trek is a huge challenge for a fat old lady with a dodgy knee and a fear of heights. I’m aware that every step after the first couple of hundred yards is going to hurt, and don’t even get me started on the fact that Cuba has spiders the size of elephants. Being the fat old one at the back of the pack means I’m the one that will get eaten if anything gives chase, but I’m doing it anyway. I’m doing it for me, and I’m doing it for my dad…I hope he’d be proud.

My name is Patrick Ireland, living in the Philippines with my wife and two daughters. I have been studying the web for over a decade. Now that I am 60 years old, I am starting to apply some of the knowledge that I have gained. "Learn from yesterday, live for today, hope for tomorrow. The important thing is to never stop questioning." -Einstein.
Previous Guardian Mortgage Company Raises Funds for Flint Water Crisis
Next AFS 401(k) Announces Launch of Personal Finance Tool, MoneyNav